Concerns about a vast increase in laughing gas addicts

Concerns grow about the large number of young people addicted to laughing gas: ‘Existing treatments have a bad effect’.

Using nitrous oxide is quite accessible. Because it is (still) legally available, people often think it is completely safe, but is that right?

Addiction experts warn of an explosion in laughing gas addicts. Current treatments do not work, leaving care providers powerless. “The relapse rate is enormous.”Brijder Jeugd, a Dutch organisation which specialises in addiction care for young people, has had to set up a special laughing gas team. “Two years ago, a young person with a nitrous oxide addiction would sporadically knock on our door,” says Gwen van Rooij, a nursing specialist at Brijder Jeugd, to Trouw. “But now nitrous oxide is the problem for 10 per cent of all our four hundred patients.” Addiction psychologist Ellen van Geffen of the Amsterdam-based Arkin Jeugd/Jellinek recognises the picture and speaks of an ‘explosion’ of patients. 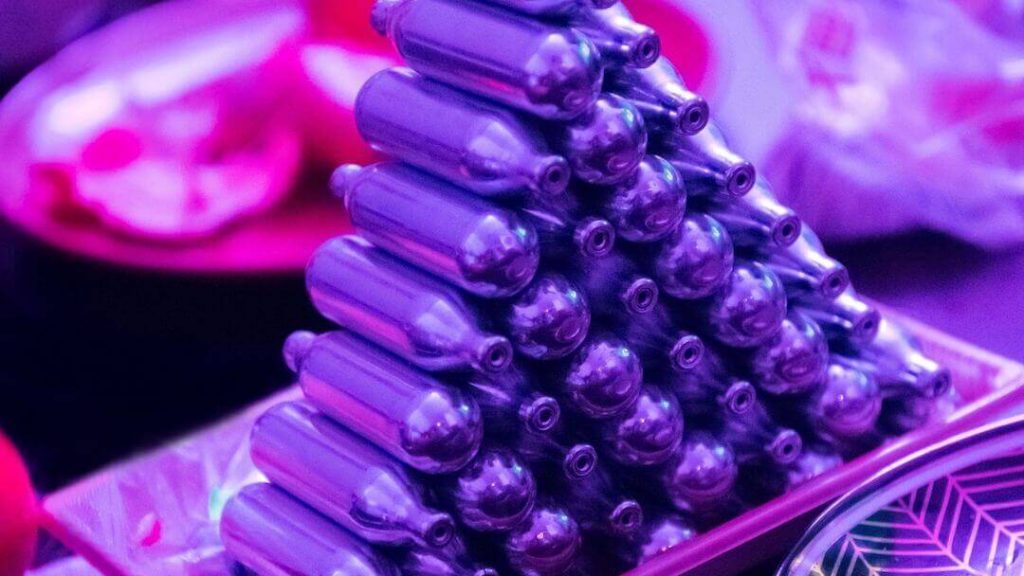 What is laughing gas?

Nitrous oxide has a sweetish smell and used to be used as an anaesthetic in hospitals. Today it is used in the food industry – especially by pastry chefs – as a propellant to spray whipped cream. It is also used as a short-term painkiller by dentists and in ambulances. That type of nitrous oxide is mixed with oxygen and of medical grade.

Nitrous oxide is non-toxic, but its long-term effects on the body are still unknown. This is because the nitrous oxide sold today has a different chemical composition, is produced for industrial use and has not been tested for safe human use. The gas is usually available in metal cartridges. In recreational use of the gas, it is injected into a balloon by means of a whipped cream syringe, or from a large tank. If you inhale the gas, it produces a brief intoxication with a severe narcotic effect.

Nitrous oxide produces a short but strong effect similar to feeling drunk. Sound suddenly sounds different, your vision becomes blurred, you feel light-headed and colours become more intense. You feel euphoric, and dreamy and can get the giggles.

The effects of laughing gas can vary from person to person. You may also experience less pleasant effects, including nausea and feeling anxious and dizzy. At higher doses, you may even start to hallucinate. Nitrous oxide enters the blood through your lungs. Most of the nitrous oxide is exhaled and a small amount ends up in the urine.

That regular use of laughing gas can cause serious neurological damage, rendering users unable to walk, for example, was already known. However, the fact that laughing gas is also enormously addictive is far less well known. According to Van Geffen, the addiction builds up very quickly, much faster than with cannabis, for example. “The youngest person who came to us was a 17-year-old girl in a wheelchair. She had already suffered neurological damage, but despite this she could not do without laughing gas.

According to Brijder Jeugd, the usual therapies are not sufficient to help someone get rid of a nitrous oxide addiction. The relapse rate is also very high. “We have admitted young people to the clinic for up to 14 weeks. But as soon as they left us, they relapsed and we heard that, for example, they were back in a hotel room at night with a laughing-gas smell between their legs”, says Marianne Post of Brijder Jeugd to Trouw. According to her, the young people who knock on the door are often psychotic, confused and very gloomy.